Yankova and Botteram win the overall

After four races, the iXS European Downhill Cup 2021 is already in the books. After another tough competition last weekend in Spicak, Czech Republic, Izabela Yankova and Tristan Botteram left the field with the prestigious series victory.

Admittedly, this year's end of the iXS European Downhill Cup season is quite early. Considering the current situation and the uncertain prognosis for the near future, this planning seems to make sense. Due to the delayed start of the season and the difficulties of the current time, there were only four races of the European Cup this year, but this should in no way reduce the level and importance of the series. It started at the end of June in Brandnertal, Austria, before continuing four weeks later in Pila, Italy. The third round of the series opened with a real highlight, the downhill triple in Maribor, Slovenia, where the European Cup race was followed by the European Championship and the subsequent World Cup race.

Now Spicak in the Czech Republic was on the program as the season-ender, the racetrack is the oldest member of the European Cup Series. The iXS European Downhill Cup has been returning to the Bohemian Forest since 2010 and has seen many stories there on and off the racetrack. Year after year, the Struggle Trail with a total length of 1,800 m and an altitude of 320 meters is transformed into a race-ready course. Of course, the route is not the longest, but the changing surface of rocks, stones, forest floor and root passages alone guarantees a high standard.

As always, it started on Friday with the Track Walk, most of those present already knew from the past what they were going to get into. But of course, there were also some who paid a visit to the bike park on the Czech-German border for the first time and if you asked them, there was a bit of respect for the location of the competition. The subsequent training was again used extensively to adapt to the conditions and to get used to a racing line. The weather played along again and presented itself well-tempered and dry.

Saturday showed itself from its best side again and with the qualification it became clear who had ambitions for victory. But besides the racetrack, there was also some information that influenced the outcome of the race and even the potential series win. The Swiss Noel Niederberger did not arrive quite healthy and his hopes for an improvement in his condition were not confirmed. Unfortunalety he couldn´t leave his mobile home on Friday and therefore had to admit defeat on Saturday and thus he had to give up the victory in the overall standings, which he believed to be almost certain.

In the Elite Women class, Izabela Yankova (BUL - Riders United) did what was expected of her and set the best time with 3:41.967 minutes and almost 16 seconds ahead. With this she was sure to win the series and the result of the final was just wasted. In the Elite Men class it was Johannes Fischbach (GER - Raymon Racing) who coped best with the tough conditions. The former four-cross racer set a benchmark of 3:02.778 minutes on the course. However, some positioned themselves behind to get the necessary points for the series podium in the final.

Sunday again provided with the best weather and slowly the field of participants had got used to the track. In the morning training, the last potential changes of line selection were trained again before the finals started shortly after noon.

As always, the first class was the Pro Masters category, but this time it was quite small in numbers. In the end, Billy Caroli (SUI - Fabien bike tramelan) won ahead of Vice European Champion Frank Hedwig (GER - RAD-ART) and Christian Domanegg (ITA - MTB-Raceshop.ch).

In the U17 male class, Christian Hauser (ITA - 3stars - Alessibici) confirmed his performance of the season despite a poor qualifying result and secured the lead in the overall standings with his second win of the day. Second in the race in Spicak was Henri Kiefer (GER), followed by Samu Kauppinen (FIN - Pyorahuolto.com), who also achieved second place in the series classification. 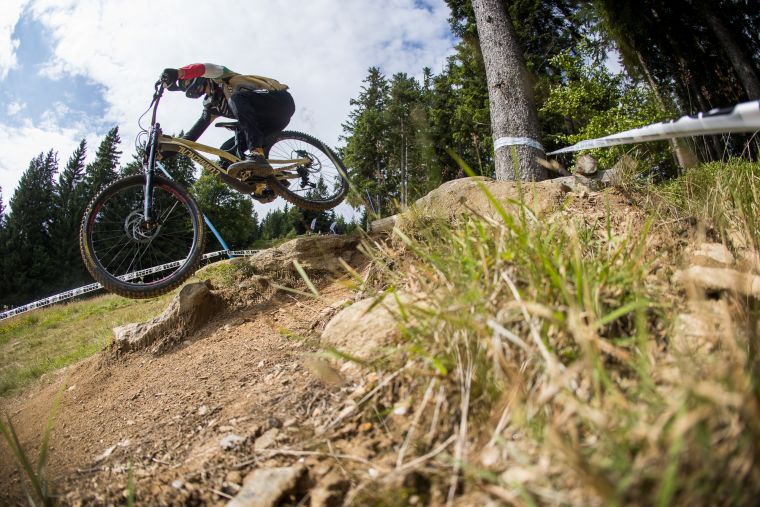 There was no major surprise in the Elite Women class. Izabela Yankova confidently won the day and left the field as a serial winner. Justine Welzel (GER) came second in the final and was able to move up to second place in the overall standings. Twenty-year-old Marlena Neissl (AUT) came third in the day's ranking and was able to draw attention to herself for the second time this season. 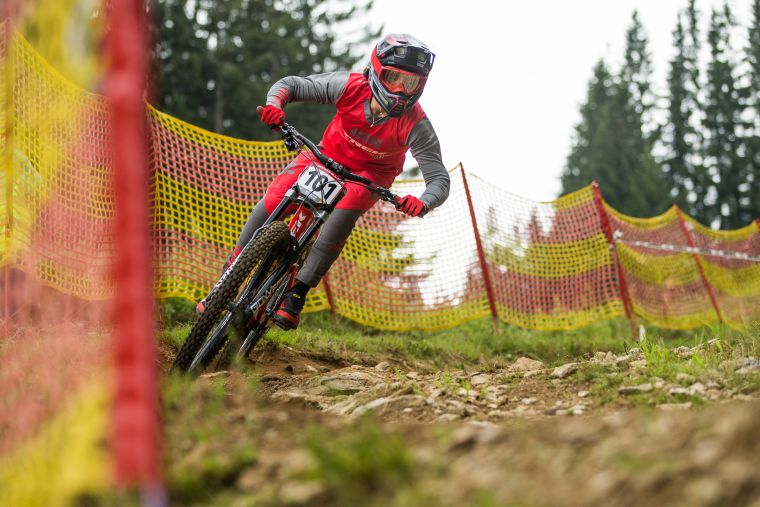 Izabela Yankova is already competing in the elite class, although she is actually still a junior © Rick Schubert

As on the day before, Dylan Maples (USA - Commencal) prevailed in the junior class. The young American won an international race for the first time and thus also the series classification. The podium of the day's results was completed by Andrea Scalcon (ITA - 3stars - Alessibici) and David Cvinger (CZE - ORE MTB Racing Team). 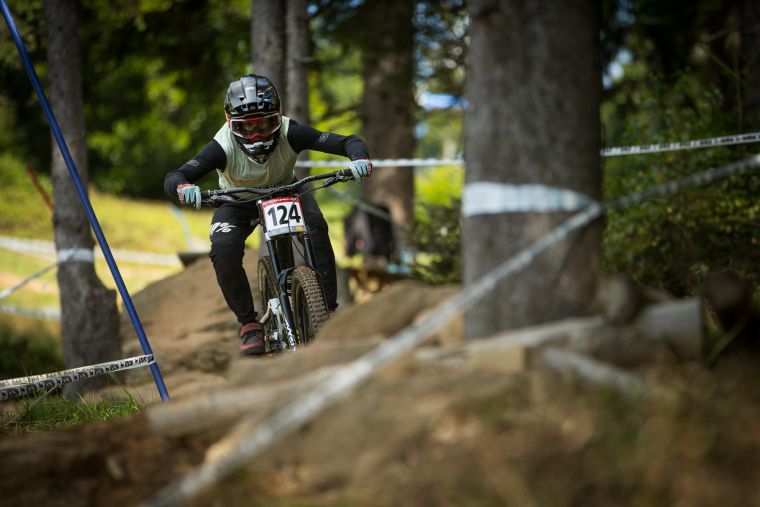 In the Elite Men class, however, the race looked more exciting. There were some podium contenders and due to Niederberger's absence everything was still open in the overall standings. Onni Rainio (FIN - Saracen SportSource) had the greatest chance of winning the series, but in the end, he only reached 18th place in the Super Final and thus could not reach for the title.

Tristan Botteram (NED - Canyon CLLCTV) was next in the list of those present and promisingly placed and he actually took the chance. With a time of 3:04.847 minutes he fought for victory with a wafer-thin lead of only twelve thousandths of a second. In his third elite year he was able to win a race for the first time and thus made it to the top step of the podium in the series classification. Adam Rojcek (SVK - Banshee Racing Brigade) finished second in the race, followed by Austin Dooley (USA - Commencal), only three thousandths of a second behind. And Johannes Fischbach, who was listed as fourth, was only a further six thousandths behind, which is probably one of the tightest podium distributions in the history of downhill sports. Fifth in the race was Rastislav Baranek (SVK - Kellys Factory Team), for whom this result was enough to finish the season behind Niederberger in third place in the series standings. 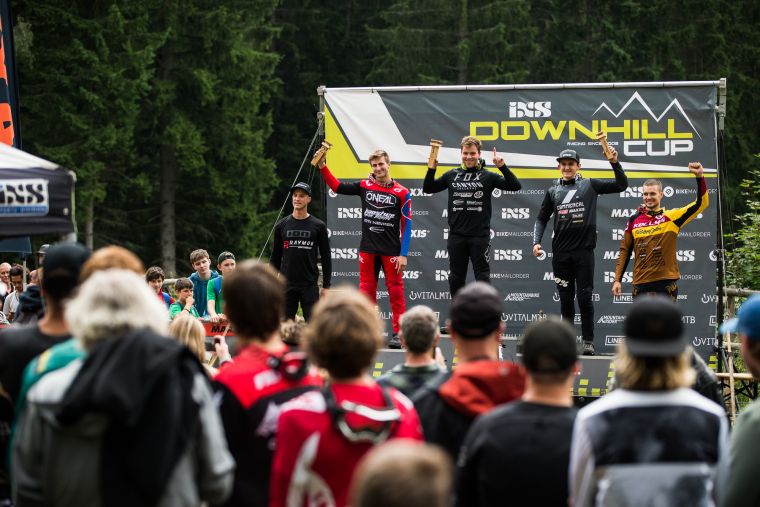 In any case, Spicak held up the flag of downhill sport during this difficult time and offered a top-class race to those present from at least 21 nations. It will be interesting to see how many more races will be possible this season.