In the coming season, the iXS European Downhill Cup will be held for the first time in Losinj, Croatia. Here we would like to provide some information to introduce the new venue.

We are very happy that we were able to publish a very full and attractive race calendar in the twentieth anniversary season of the iXS Downhill Cup despite the difficult situation due to the pandemic situation. Two new venues in the European Cup were certainly conspicuous here, which are something special simply because of their geographical location.

Losinj will host the series opener next season and is extremely early with the date on the first weekend of April. So it will be a special situation for the athletes. After usually starting more than a month later in the past, it now means that season preparation should be completed a little earlier. For many, this will not only be the first race of the year, but for some it will probably also be the first opportunity to get back on the downhill bike after the off-season. Even though for the pro athletes the World Cup will already start a week before in Lourdes, France, we assume that Losinj will still be used by some as a race to get into the competition season. We are curious to see what the conditions are like on the island in the Adriatic at this time of year, after all it is one of the sunniest places in Europe.

The location of the venue is unique and will be an interesting variation for the iXS European Downhill Cup. The island is blessed with a pleasant climate and a breathtaking natural landscape. Combined with the 2,600 hours of sunshine the island enjoys every year, the European Cup Lošinj is the perfect place to enjoy top racing action and get into the holiday spirit. The venue is located in Veli Lošinj, a medieval town of 1,000 inhabitants. As a larger town, Mali Lošinj with 8,000 inhabitants is located three kilometres to the northwest and is connected by a regional road. Veli Lošinj is situated in a narrow, sheltered bay on the south-eastern side of the island of Lošinj at the foot of St. John's Hill. Several luxurious villas with special gardens form a picturesque backdrop to this beautiful place.

The track finishes in the harbour of a small town, therefore the space for camping is limited. We strongly reccomend to riders and stuff to use the nearby Hotel Punta**** or their apartments with pools, spa and fitness, as they will offer great package prices for participants (https://www.losinj-hotels.com/). Registration office will also be in Hotel Punta****, therefore the team area, finish area and uplift system is within walking distance of a few hundred meters.

For a better overview, we have attached two maps below so that everyone can get an idea of the local conditions in advance. With the destination directly in the old town and at the harbour, it is of course not the case that there is an infinite amount of space in the direct vicinity. Nevertheless, everything is available and not far away. 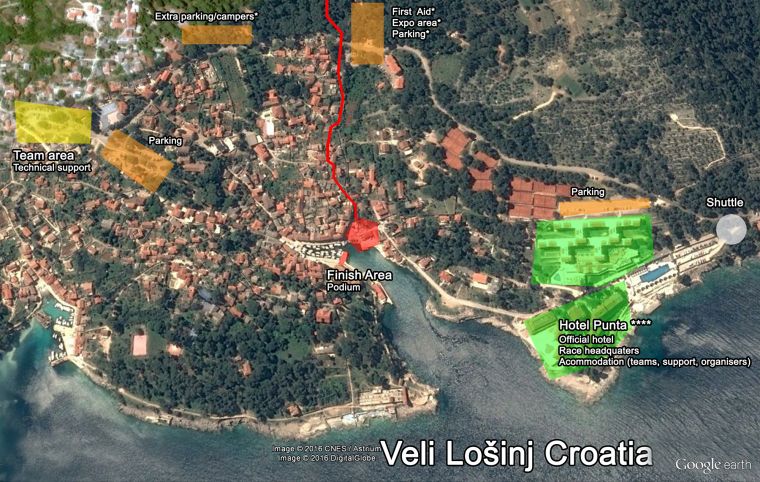 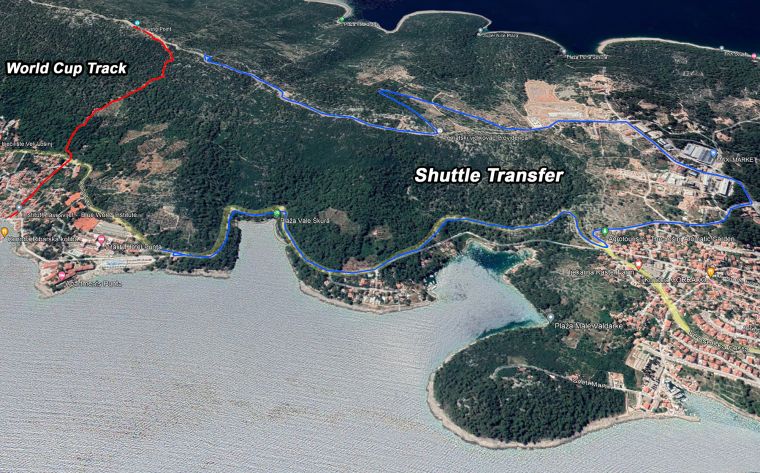 HOW TO GET THERE

The islands of Cres and Losinj, both connected by a swing bridge, can be reached by ferry, with two connections. From Central Europe you use the connection from Brestova - Porozina (island of Cres), from Eastern Europe the crossing from Valbiska (island of Krk) - Merag (island of Cres). The ferries are large and modern. The crossing on both ferry lines takes between 20 and 25 minutes. Prices for both connections are around 30 euros for vehicles between 5 and 7 metres.

The Croatian holiday paradise offers probably the stoniest course with endless scree. It has already proven its suitability in the World Cup, and three years ago it enjoyed great approval among the riders due to the beautiful location, the fantastic weather and the enthusiastic crowds of fans. After a short start section, there are some gaps that are not to be scoffed at and then the decisive, extremely stony and partly narrow section that extends to the outskirts of the small town of Veli Lošinj. Here follows an urban DH course with an almost dead-straight path down to the harbour in the town centre. There, the riders and spectators can expect what is probably the most beautiful finish of the season. Below is a video that served as a preview of the World Cup course: