Scarci and Niederberger are the Winners

The first stop of the iXS European Downhill Cup is now in the books and the long dry spell is finally over. Gloria Scarsi and Noel Niederberger immortalized themselves by winning the elite classes in the Austrian Brandnertal.

After the pause last year for known reasons, the European Cup was finally able to kick off again last weekend. The 2021 season began with a little delay and the originally scheduled racing calendar had to succumb to changes a few times, Brandnertal was now for the first time on the agenda as opening event. This choice didn't appear that bad, after all, the weather had often shown its bad side at the end of the season in the past. 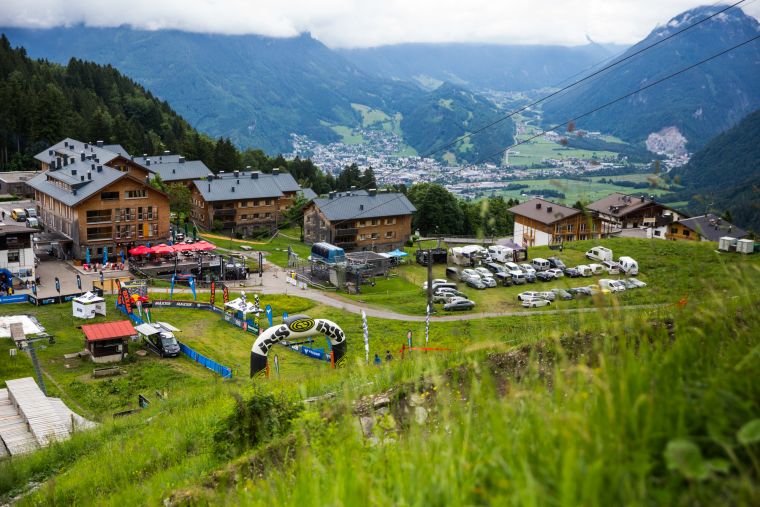 The number of participants was very decent, like expected after such a long absence from the series. 240 athletes from a total of 28 nations had come to compete against the clock on the demanding track with the descriptive name Tschack Norris. The task was to conquer a total track length of 2,300 meters with a difference in altitude of 300 meters, which wasn´t that easy at all, especially on Friday in wet conditions. Despite the innumerable polished roots, the track also delivered very physical but very rewarding sections that multiplied the fun factor enormously, like the new part of the bottom section and it´s perfectly shaped jumps. 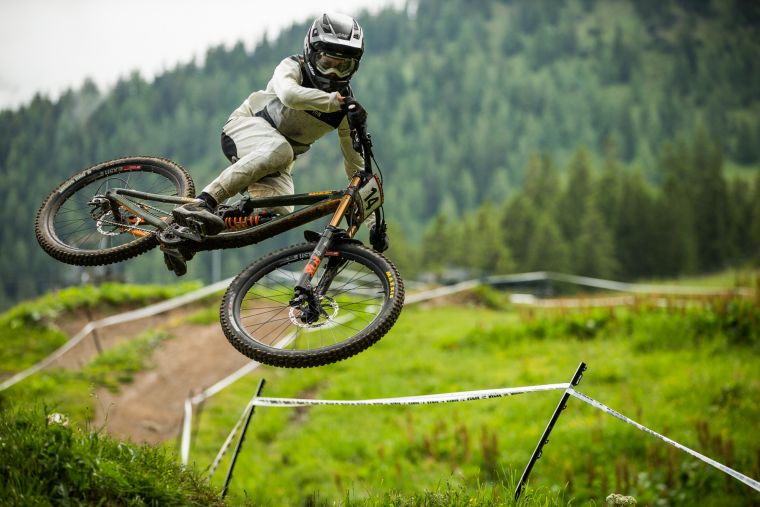 For most of the athletes, the weekend began with setting up the pits before the start numbers could be picked up on Friday morning. Unfortunately, the organizational requirements regarding the pandemic restrictions led to a somewhat longer procedure, which was noticeable in the waiting time. After this test of the participants patience had been completed, the track walk was followed by the first training session. The track dried up slowly and resulted in an increase in speed in the rider’s field. 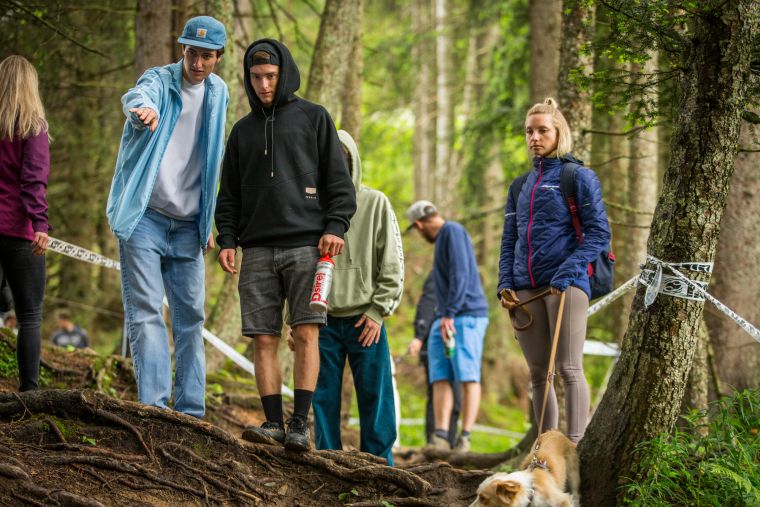 Saturday then began more pleasantly in dry conditions with a clear blue sky. There was again enough time on the race schedule to train before things got more serious for the first time in the afternoon. The qualification was a first indicator of how everyone's current level of performance was compared to the competition. It turned out that it was going to be an extremely exciting final, as there were some contenders for the podium in many classes. And anyone who has recently followed the series in the youth segment has often come across certain names in the Rookies Cup, for example, that can now be found in the European Cup. These undoubtedly very talented young athletes went into this series with a considerable lead in racing experience and now had to proof themselves against an even larger international field. We can definitely anticipate one thing at this point: the fight for the win between Kiefer and Huter continued in the European Cup series. In the end it was ... and ... who set the best times in the elite classes and therefore set the bar quite high. The outstanding specialty of this racing format is the Super Final, for which the Top 30 Elite Men riders qualified and among them the race victory was held on Sunday. For this reason, it was already pretty exciting on Saturday, because for many riders it was about this first hurdle. 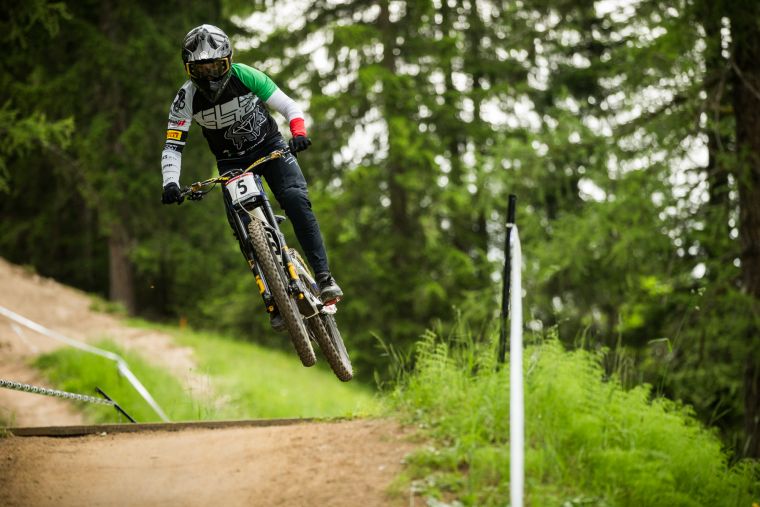 The final day started and again the conditions were more than appropriate for the occasion. It turned out for Brandnertal, an early choice of dates seems to make sense, after all, the bike park and the region can present themselves much better in summery conditions and recommend them for a return visit. It started after the morning training with the finals at noon. 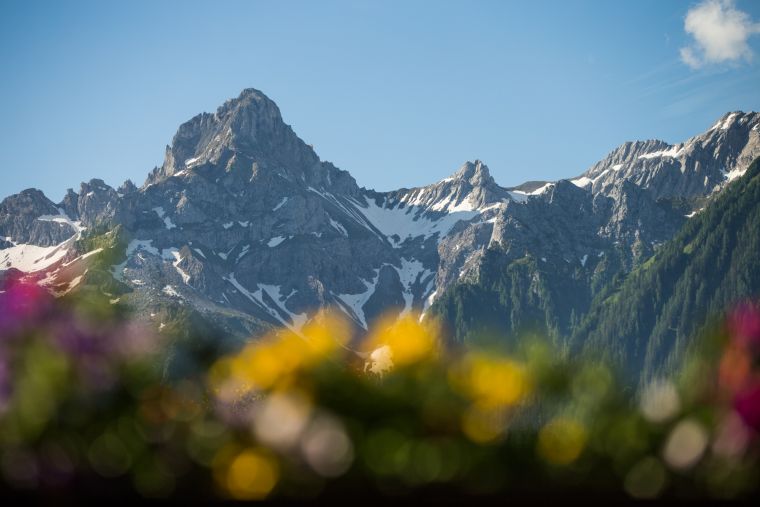 Followed by the next class of the young female athletes and ranked in the following order in the results list: Vanesa Petrovska (SVK - Deem Racing Team) on one, Sofia Priori Viale (ITA - Ponente Gravity Team) on two, Sophie Onions (SUI - Arosa Bike) in third place.

In the U17 male class, Henri Kiefer (GER) was the last to enter the course as the qualification winner and also set a new best in the split-time. Until the finish line, however, he somehow lost some time on his eternal rival Mike Huter (SUI - Gamux Factory Racing), who was able to claim the victory with an incredible seven thousandths of a second. Third was Tegan Cruz (CAN - RockShox Trek Race Team), who spends the season here in Europe and is slowly being prepared for bigger tasks by his team with a lot of commitment. 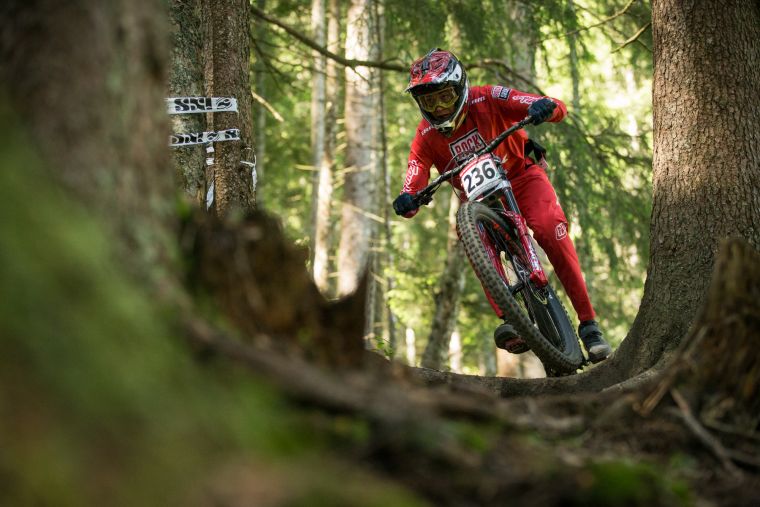 The U19 female class was dominated this weekend by Anastasia Thiele (GER - Pivot Cycles), who with her time of 3: 28.199 minutes could also compare with the Elite Women, if she would have finished seventh there. Second place went to Anouk Arendt (GER - BSS Devo Team), followed by Marlen Hassfeld (GER - SC Korb).

It got really exciting again with the 15 female riders in the Elite Women class. Izabela Yankova, who was classified as the fastest the day before, was actually still a junior, but decided to start in the elite class and with the qualification result showed that she did not gamble too high. Now the question was whether she would also be in the final and withstand the pressure. The meantime revealed a minus of six tenths of a second for her, which she “only” had to save to the finish. However, the young Bulgarian could not maintain this wafer-thin lead, but took second place a little more than a second behind, which was not enough for her to achieve an absolutely perfect result, but in the first elite race a second place should probably be more than satisfied. 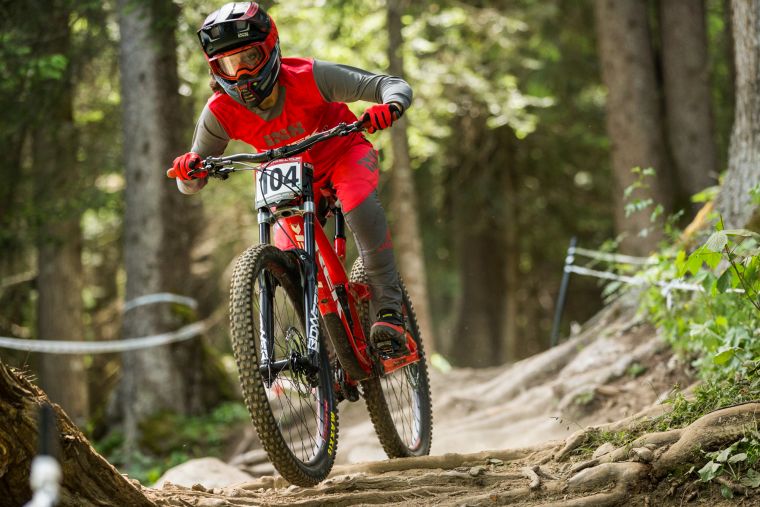 As the winner of the season opener, Gloria Scarsi (ITA - Team Marchisio bici) immortalized herself, who has so far hardly appeared in the downhill area. The only 20-year-old Italian had so far only placed fourth in the 2020 National Championship, but in her youth, she was quite successful on racing bikes and track cycling. The victory proves her technical skills and it is to be hoped that she will be a frequent guest in the gravity sport. 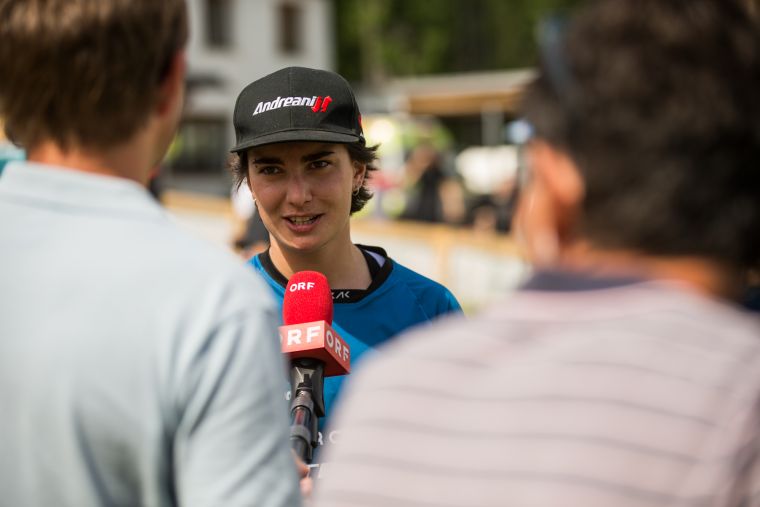 Third place for Alia Marcellini (ITA - ASD Camping Arizona), who was visibly satisfied with the result, after all, after a Leogang crash, she started with a damaged shoulder and therefore felt that she was not in full physical condition. Another name in the elite women field still stands out, because Ramona Laura Kupferschmied (SUI - Swiss MTB Pro Team) was a former young talent in the Swiss cross-country scene and this season switched to the more downhill discipline. In her third downhill race, she reached tenth place, which certainly gave her a realistic classification in an international comparison. Once again, this shows that the European Cup is a talent factory for the future world elite and confirms the understanding of acting as a link between national races and the World Cup.

In the subsequent junior class of the male U19s, the Europeans let the butter be taken off their bread. In places one to three were lined up, including athletes who had to travel across the pond. The winner was Remy Meier-Smith (AUS), who, with a time of 2:45.190 minutes, was four seconds ahead of the two Americans Dylan Maples (Commencal USA) and Colin McElyea.

The last competition was, as usual, the Super Final of the Elite Men. Adam Rojcek (SVK - Banshee Racing Brigade) was the first on the Red Bull Hot Seat with a serious time of 2:43.676 minutes. Then came Henry Kerr (GBR - Propain Factory Racing), who undercut by 1.7 tenths of a second and was already four seconds short of the best time of the previous day. Austin Dooley (USA - Commencal) came seventh from last and pushed himself between the two and thus proved that the last word had not yet been spoken. The next two starters could not have a say in the result, but then Noel Niederberger (SUI - Privateer Powered by Bike Tech) rolled over the finish line and the scoreboard showed a time of 2:41.632 minutes and a green minus of 15 hundredths. 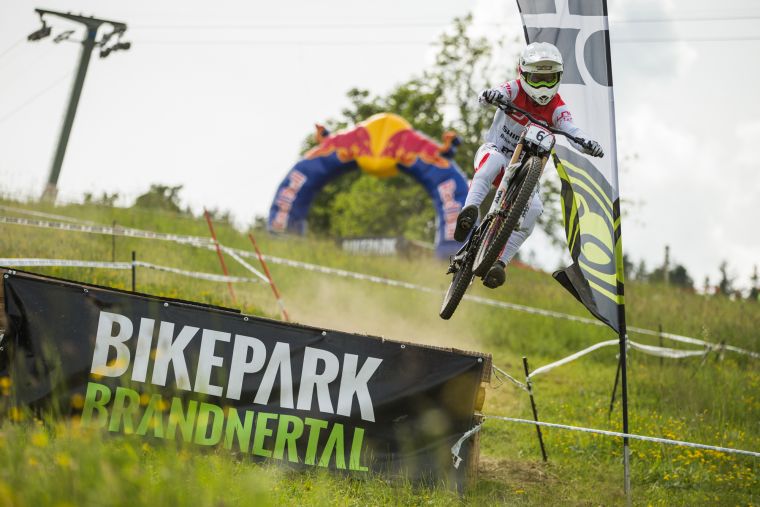 So now there were only three riders left on the top. Ronan Dunne (IRL - Continental Nukeproof Racing) had the fastest intermediate time, but at the finish a little behind Niederberger. In the next moment Dante Silva (USA - Canyon) flew over the jump shortly before the finish and only the scoreboard could show that it was not enough because it was eight tenths. The only thing missing now was Davide Palazzari, who was fastest the day before, only two tenths behind in the meantime. Would he have the nerve to catch up in the lower half? He crossed the finish line and it was less than the blink of an eye what he was missing. With a gap of almost nine hundredths of a second, he took second place behind the Swiss. The podium was thus established, Niederberger in first place, Palazzari in second and Dunne in third, followed by Kerr and Silva. Incidentally, the top six all landed within one second, which underscored the extreme density of performance. Such exciting races are what make downhill sports! 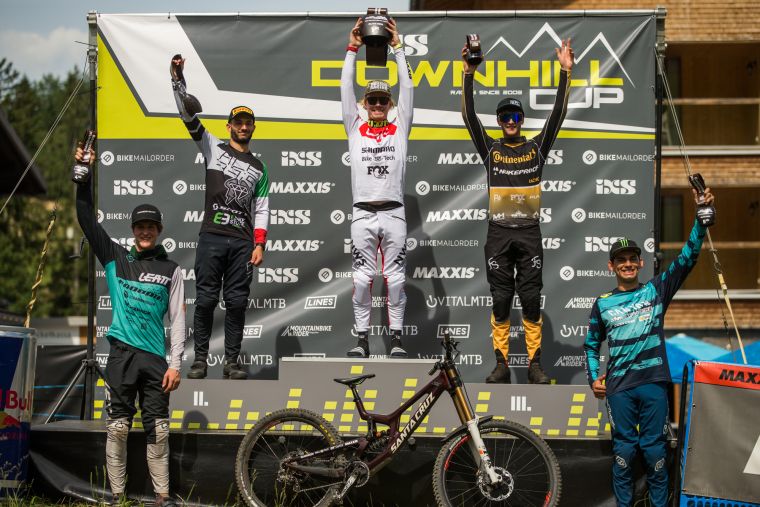 It is very nice to see that things are finally returning to normal and that the racing series can now also be held. Brandnertal delivered an absolutely worthy race for the start of the European Cup and despite the fact that there can only be a total of four stops this year, it will be an exciting competition for the overall standings. The next race on the calendar is the Italian Pila in four weeks' time.