Open the calendars, take out your pens, submit your holiday requests and inform your racing crew - the iXS Downhill Cup Calendar 2023 is now online. From Austria to Croatia, from Ilmenau to Bellwald; the new year has some real classics in store, but also shines with new, but still traditional downhill spots.

About three months ago, we sadly looked towards the end of the 2022 racing season - some of us at the end of the series in Bad Tabarz, others at the last race of the iXS European Downhill Cup in Pila. The autumn still had a few beautiful days on the bike in store, but now the winter has definitely arrived. The downhill bikes were put away for the winter season and the sessions in the gym are slowly becoming a daily routine. But also the one or other beer is drunk in the off-season, or a warm mulled wine is enjoyed on the couch. 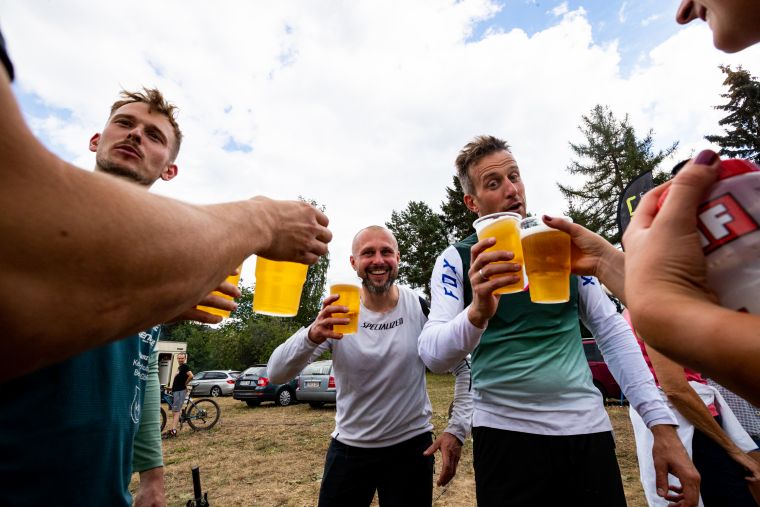 Cheers! After the last race of the iXS Downhill Cup, the men totally deserved it...

But while some were reminiscing, the Racement-Crew was busy planning the new racing season: Phone calls were made to event organisers, many emails were sent to find the right date and sponsors were visited in their rooms. And now we're getting you out of the winter depression and into the annual planning for the iXS Downhill Cup season 2023! 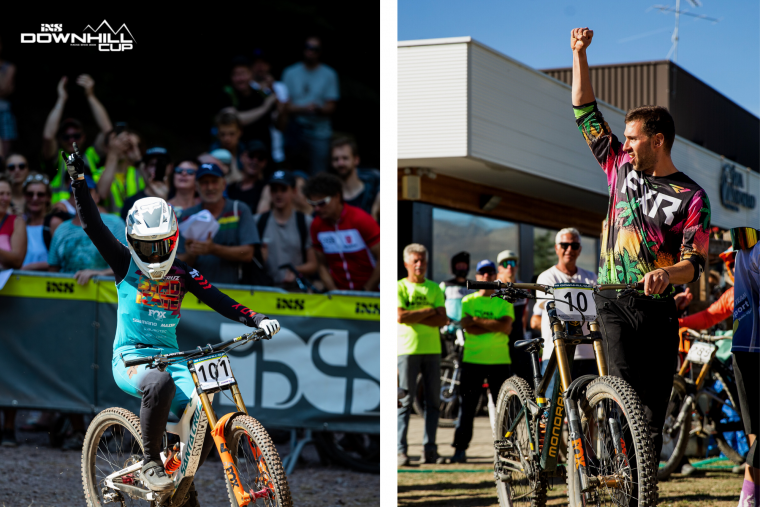 As it should be the case for a decent racing season, the venues will again be very diverse. The different track conditions and outlines will show who has mastered their riding technique precisely enough to be able to celebrate their victory at the finish line. To cut a long story short, we present to you the iXS European Downhill Cup and the iXS Downhill Cup Calendar 2023. 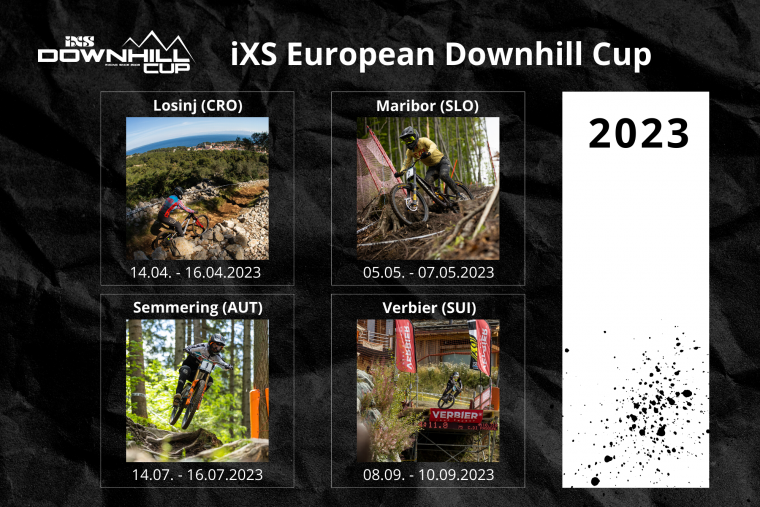 From Austria to Croatia: The 2023 iXS European Downhill Cup Calendar

For those who were upset that they didn't go to Croatia to the island of Losinj last year, the iXS EDC will give them another chance in 2023. The venue wants to offer the athletes again a unique course between sea, harbor and rocky terrain. We asked Racements' timekeeper-icon Julius Trautenbach how he as a organizer experienced the race in the Mediterranean atmosphere: 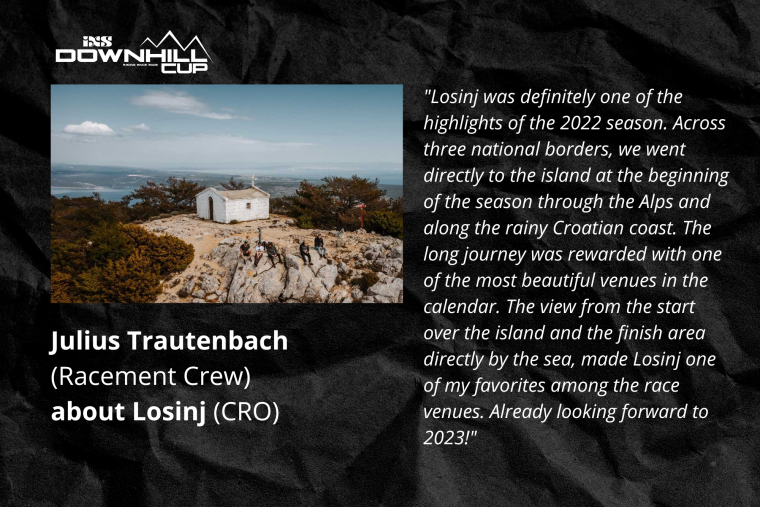 This year, Maribor (SLO) surprised the participants with a completely fresh and loose section of the track, which was quite challenging for the riders. Let's see what the Bikepark has in store for the athletes in 2023. Austria's Semmering will also be part of the schedule again and, in addition to "Wiener Schnitzel" and delicious "Käsespätzle", will present a downhill track with technical rock and root sections. The line choice will be crucial here. Your wheels will thank you... And now it is time to celebrate: Verbier (SUI) is back! The bike park hosted the iXS Cup the last time in 2017. The happier we are that years of partnerships pay off and that we can finally include the venue in the race calendar again. And now to the iXS Downhill Cup... 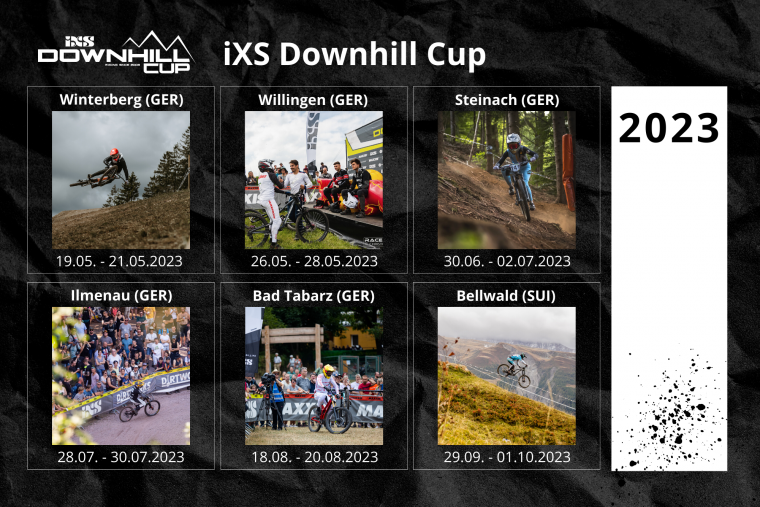 Back in the iXS Downhill Cup next year: Bellwald (SUI)

Throwing whips at the iXS Dirt Masters in Winterberg, walking across the Expo Area in Willingen, collecting slate stones in Steinach, flying over the iconic finish line jump in Ilmenau, sitting together in the paddock in Bad Tabarz and taking beautiful panoramic pictures during the track walk in Bellwald... Who doesn't miss the iXS Downhill Cup? With five venues in Germany and one in Switzerland, you can definitely expect great and popular tracks and also renewed love for the downhill sport in Bellwald in 2023. Next year, the German Downhill Championship will take place at the Bike Festival in Willingen and we can already look forward to spectacular stunts in the final technical "roller section". And now special attention from the female race participants: From 2023 there will be an Open Masters female class in the iXS Downhill Cup, for all women from 1988 and older with and without license. For more women power in downhill sport! 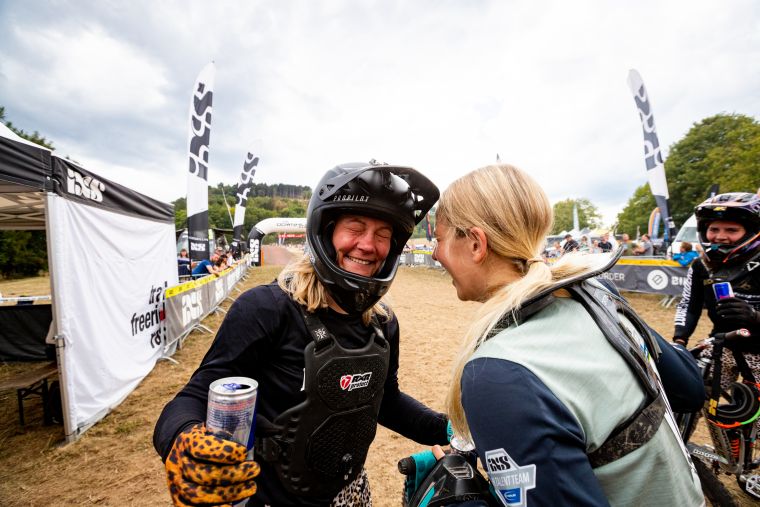 The vibes are high: From 2023 there will be an Open Masters female class in the iXS Downhill Cup.

At this point, Racement would like to thank all the local organisers and our sponsors for the great cooperations, which in some cases have lasted for years! Without you and your motivation to offer the bike community the best downhill action, there would not be race series that are the precursor for the UCI Downhill World Cup. Therefore a big THANK YOU! And what would an announcement of the 2023 race calendar be without a few nice words from our title sponsor iXS? Exactly, it would be incomplete. So let's make way for our loyal partner iXS: 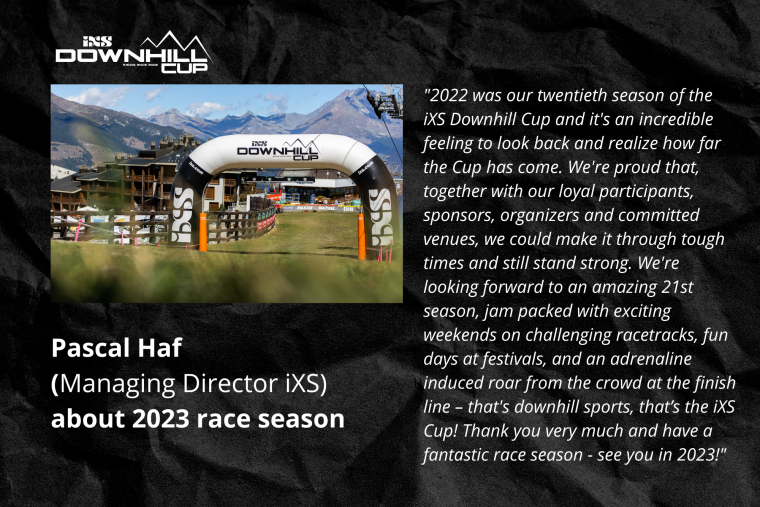 We are looking forward to many registrations next year, a good Race Vibe in 2023, maximum training motivation in the off-season and a like on Instagram and Facebook. ;)