Minnaar and Johnset win in Maribor

August heralded the second half of the iXS European Downhill Cup and after the postponement from April, Maribor was finally the venue for the third run. In the end, Greg Minnaar and Mille Johnset left the place as winners of the elite classes.

This time the third round of the iXS European Downhill Cup wasn`t merely the start of the second half of the series, but also a two-week long major event in Maribor. Immediately after the European Cup race, the European Championships are held, which in turn are followed by the UCI World Cup. Therefore, some athletes used the race in addition to the actual occasion as preparation for the subsequent two events. As usual in Maribor, the field of participants was top-class and hence an exciting competition was to be expected. In total, a little more than 250 athletes from 34 nations had registered for the event. 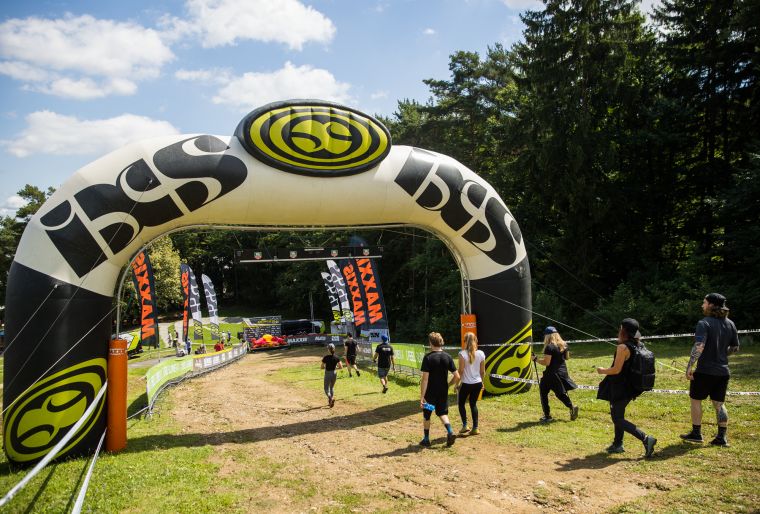 The track was slightly altered and therefore the track walk on Tuesday was pretty important for the riders. Shortly after, in good weather conditions the free training started, which unfortunately had to be interrupted due to a thunderstorm which forced the shut-down of the gondola. After the storm had passed another problem occurred, this time the lift could not be put back in operation due to a technical defect on a pillar. Somehow the can of worms seemed to be opened, the riders had to call it a day and hope that the training could be continued on the next day without any incidents. Luckily, there is always enough training time scheduled for the European Cups and therefore the two-hour failure did not matter too much. 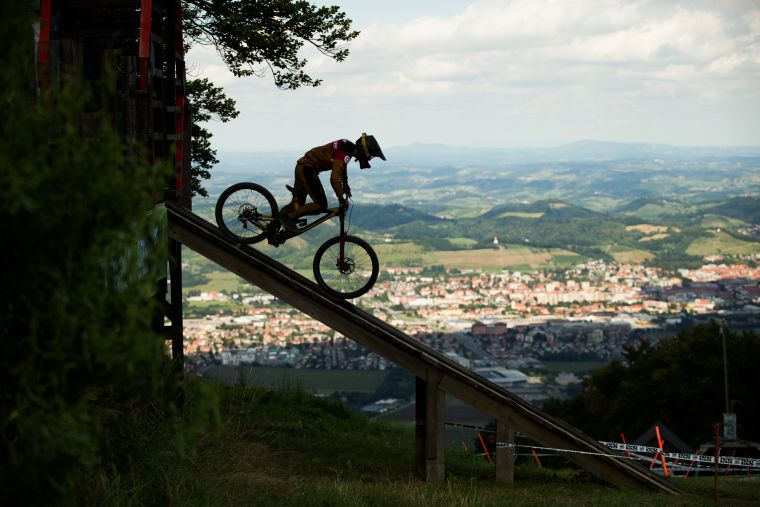 The Saturday could then take place normally in its course. The weather conditions were quite acceptable and dry, as a consequence the hard packed track was running extremely quick. In the Elite Men class, Greg Minnaar (RSA - Santa Cruz Syndicate) secured the qualifying victory with a time of 3:06.851 and 1.2 seconds ahead of the winner of the last European Cup in Pila, Tuhoto-Ariki Pene (NZL - The Union). The women were less tight timewise, because Valentina Höll (AUT - RockShox Trek Race Team) outclassed her opponents with a time of 3:37.679 and a lead of over 15 seconds. 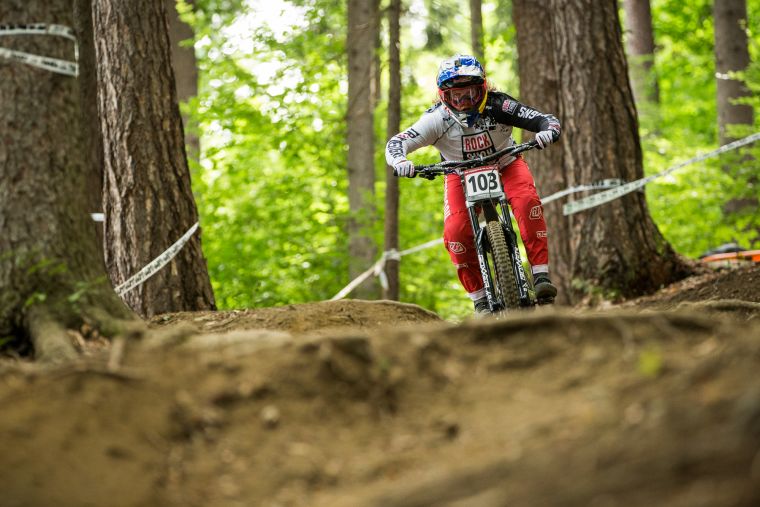 Vatentina Höll on her way to the qualification win © Rick Schubert

The weather forecast for Sunday was unfortunately less promising. Rain had already softened the ground early in the morning and the training conditions were similar to those of the later final. The announced rain started setting in exactly in time before the finals started. The third run of the series was a rainy event and made it extremely difficult for the field of participants. 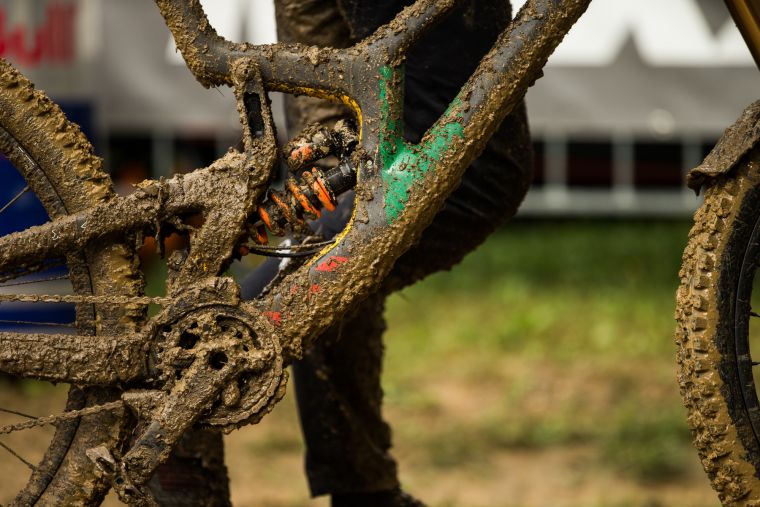 The finals were opened by the Pro Masters. Jelle Hemelsoen (BEL - Loose Riders) won with a time that was about 20 seconds behind the fastest qualifying time in the master’s class, giving a first impression of how the track conditions had changed in comparison to the day before. By the way, Benjamin Herold (GER - TNT Racing) came in second and can therefore no longer take away the series victory.

The U17 female class was won by the French Emy Grandouiller. In the male counterpart that started right afterwards, it was Rudi Eichhorn (GBR - Canyon Collective FMD) who won the race. Christian Hauser (ITA - 3stars Alessibici) extended his lead in the overall standings with his third place. 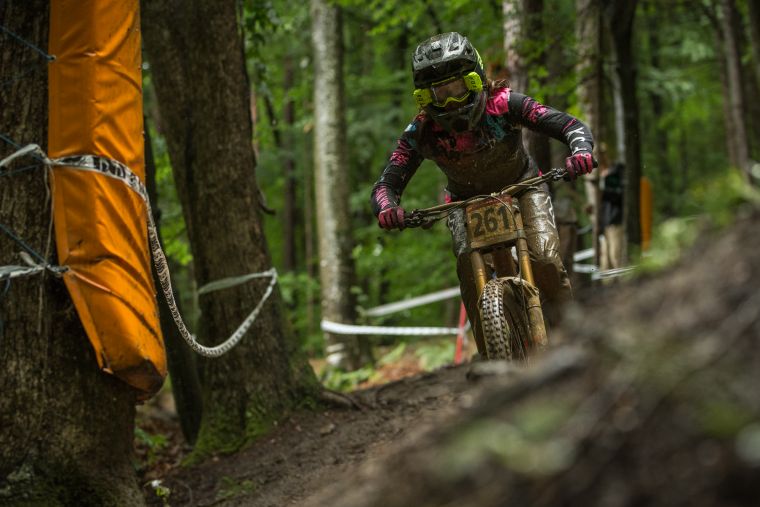 Phoebe Gale (GBR - Canyon Collective FMD) started in the U19 female class and earned her team a double win. She won by five seconds ahead of Delia da Mocogno (SUI - Bikewelt Factory Racing) and Kine Haugom (NOR - Hafjell Freeride Klubb). Then it was the turn of the Elite Women, the class again counted over twenty women. 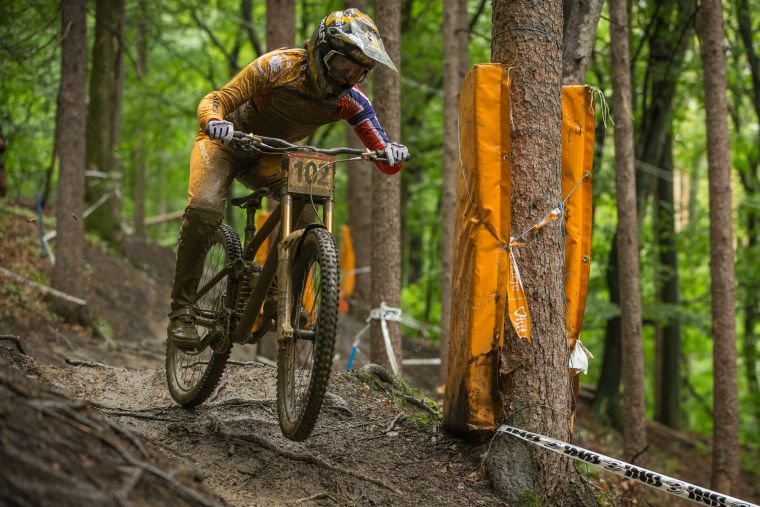 After Valentina Höll unfortunately had a flat tire at the start and, according to the UCI official, could not restart, Mille Johnset (NOR - Continental Atherton) was able to use the chance and win the race. Abigail Hogie (USA - Tillit Gravity Team) came in second, followed by Anna Newkirk (USA). The overall ranking leader Izabela Yankova (BUL - Riders United) finished fourth and thus consolidated her position. Thing’s don´t seem to be running smoothly for Vali Höll at the moment and it almost appears a bit as if she had to put in some hard yards since her change to the elite class and the resulting high expectations that came with it. We can only hope that things will go better in the next races.

Now it was the turn of the U19 riders. Dennis Luffman (GBR - Canyon Collective FMD) set a time the day before that would have been enough for a top ten result in the men’s elite class and the chance was high that the young Briton could do a hat trick for the team around Tahnée Seagrave. In the end, however, he had to admit defeat to Toby Meek (NZL - MS Mondraker), who won with a time of 3:36.332 minutes and 2.1 seconds ahead of Luffmann. Third was Remy Meier-Smith (AUS - Propain Factory Team), who managed to extend his lead in the overall standings almost unassailable.

In the Elite Men class, Greg Minnaar kept dominating the field. In the meantime, he not only pulled out a lead of almost three seconds, but also went fastest in the speed trap. In the end, he needed a time of 3: 26.507 minutes for the 2.600-meter-long track with 450 vertical meters and was the winner of the race. Followed by Henry Kerr (GBR - Propain Factory Team) with a gap of 2.8 seconds behind the fastest time. Adam Brayton (GBR) secured third place on the podium, ahead of Luke Meier-Smith (AUS - Propain Factory Team) and Luca Shaw (USA - Santa Cruz Syndicate). 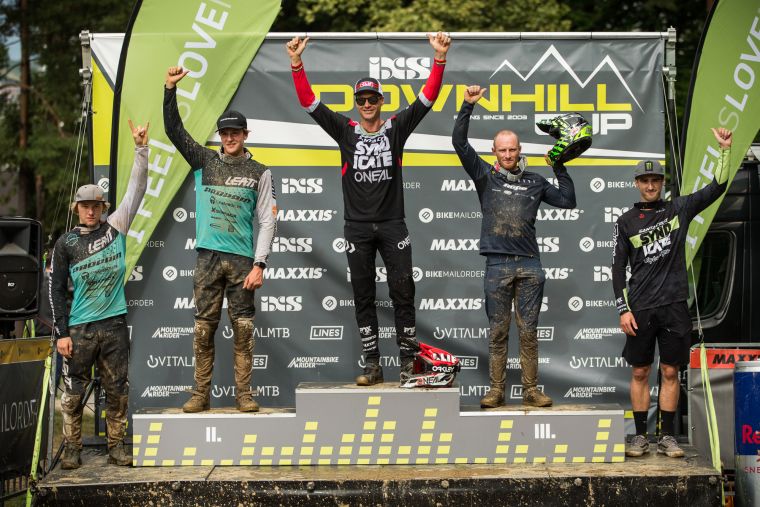 The race pace was definitely one of the tougher ones and the winners had to work hard to earn their triumph. We can only hope that the subsequent races of this two-week downhill spectacle will have slightly better weather conditions. The iXS European Downhill Cup will continue on the third weekend in August in Spicak, Czech Republic, and the fourth run will also be the European season closer.